Living Green is more than just a public television series from WUFT-TV; it reflects a new way of life for the 21st century. Living Green focuses on how communities incorporate environmental concerns into their homes, neighborhoods, and businesses to help conserve natural resources and wildlife for future generations. 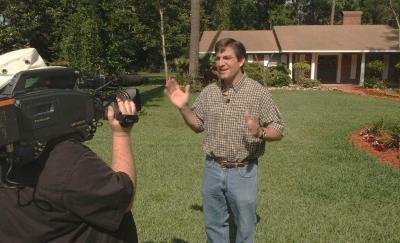 The flavor of the show is upbeat and even humorous at times, when presenting the myriad challenges and solutions associated with any environmental issue. While entertaining, the show is meant to inspire individuals to take local action and make a difference. Each episode highlights a wide range of environmental issues, outlining the need for a united response at the local and (most importantly) individual level.

Specific attention is paid to the solutions to growth/environmental challenges and the opportunities for individuals to help search for "win-win" strategies that balance socioeconomic and environmental concerns in their own communities. The show targets an adult audience, but is also relevant to middle-school and high-school students.

What You Can Do

The connection between humans and nature is an important one: our economy, culture, and even politics are closely tied to the environment. In order to function as a green community, each resident must make a conscious effort to environmentally manage their home, yard, and neighborhood.

The following resources will help you and your loved ones practice sustainable living:

Did you know that UF/IFAS Extension has a presence in every one of Florida's 67 counties? That makes it easy to find useful and practical solutions for your life. In addition, the Cooperative Extension System (CES) connects Florida with state Extension programs across the country.

Each entity listed below was instrumental in helping the show get started, and continues to lend support to produce Living Green content:

Original website content and design created by Mark Hostetler, Elizabeth Swiman, and Sarah Webb Miller. With the help of UF/IFAS Communications, the current look and functionality was streamlined for the UF/IFAS Extension Solutions for Your Life website. Al Williamson of UF/IFAS Communications uploads the steaming video for each episode. Images on this website were taken prior to national guidelines of face coverings and social distancing. The site is currently maintained and updated by Tom Barnash and Mark Hostetler.